Tweet
by Casey Carl on March 25, 2021 in Ask The Vet , The Veterinarian's Corner 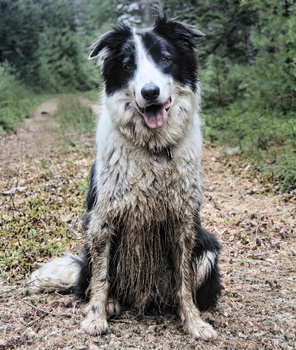 A genetic mutation in the canine RAB24 gene is associated with a juvenile-onset, autosomal recessive form of cerebellar degeneration (CD) in two seemingly disparate breeds, the Old English Sheepdog (OES) and Gordon Setter (GS). Also referred to as hereditary ataxia or cerebellar abiotrophy (CA), CD presents between 6 months and 4 years of age with progressive neurological dysfunction due to degeneration of cerebellar neurons, especially Purkinje neurons. Coordinated movement becomes progressively more difficult as the disease progresses and can include intention tremors, ataxia, and a stiff, high-stepping gait (hypermetria). Affected dogs are often euthanized due to quality-of-life concerns. Studies of the RAB24 gene in other mammals and histological evidence present in neurons of CD-affected dogs suggests that dysfunctional autophagy may precipitate the characteristic neuronal degeneration of CD.

In one study, the carrier frequency of the RAB24 mutation found in the studied population from the US and Scandinavia was 29% of 82 unaffected GS 1. In addition, 11% of 254 unaffected OES from 70 different breeding kennels were found to be carriers of this mutation1.

In one study, the frequency of carriers of the FAM20C mutation was found to be 11% of 191 border collies studied 2.

A concern among collie and Shetland sheepdog lovers for nearly four decades, dermatomyositis (DMS) is a complex autoimmune disease of the skin, blood vessels, and musculature with both genetic and environmental risk factors. DMS commonly presents prior to 6 months of age with multifocal or generalized cutaneous vesicles, ulcers, scales, crusts, erythema, and alopecia on the face, pinnae, bridge of the nose, and lips. Bony prominences or other areas of the body prone to trauma (e.g. feet, footpads, elbows, stifles) are also commonly affected3,4. In severe cases, dogs may become permanently scarred or alopecic and may have permanent alterations of skin pigment4. Although some dogs do not develop signs of DMS until adulthood, DMS severity commonly peaks around one year of age. Skin lesions can persist from weeks to months and some dogs may develop recurring skin lesions3.

Skin lesions tend to precede muscle disease of DMS, however in some cases, myositis occurs in the absence of skin lesions. Although myositis-related muscle atrophy can be diffuse, atrophy of the temporalis and masseter muscles is often grossly evident and affected dogs may have difficulty eating and drinking due to poor jaw tone. Affected dogs often develop a stiff-legged gait and may show hyperreflexia4.

Genetic testing results are invaluable for breeders to make informed breeding decisions and to prevent rearing puppies with high-risk DMS genotype combinations. Although definitive diagnosis of DMS is generally achieved through skin and muscle biopsy, genetic risk of DMS can be estimated by the combination of genotypes at three specific locations (loci) in the genome; the MAP3K7CL and PAN2 genes as well as the dog leukocyte antigen (DLA) gene, DLA-DBR1. A dog’s combined genotypes at these three loci place them in one of three risk groups based upon their estimated chance of developing clinical DMS: low risk (0 to 5%), moderate Risk (33-50%), and high risk (90-100%)3. Collies and Shetland sheepdogs are at particularly high risk of developing DMS due to a high frequency of the risk alleles when compared to other breeds3. However, environmental triggers such as exposure to UV light, vaccination, viral infection, or other stressors appear to also play an important role in the development of DMS as they often precede the onset of clinical signs3.

An autosomal recessive form of primary open angle glaucoma (POAG) has been associated with a genetic mutation in the ADAMTS17 gene in basset hounds. Age of onset is variable but affected dogs commonly present between three and six years of age with characteristic signs of increased intraocular pressure including exophthalmos, tearing, excessive blinking, and redness. As with all glaucoma, gradual vision loss occurs as increased pressure damages the optic nerve and causes retinal cell death.

A random sampling of 223 unaffected basset hounds from the UK found 16% of them to carry one copy of the ADAMTS17 mutation, making this mutation a common concern in the breed5,6. It should be noted that basset hounds are also known to inherit a type of primary closed angle glaucoma (PCAG)7. However, no specific genetic mutations have been associated with PCAG in the breed as of this writing. Unlike the straightforward, recessive inheritance of POAG in basset hounds, PCAG is believed to be a more complex condition with both genetic and environmental risk factors7.

Pituitary dwarfism (PD) in the German shepherd dog is a relatively common type of autosomal recessive dwarfism associated with a genetic mutation in the LHX3 gene. Affected dogs experience a congenital defect in the differentiation of endocrine cells of the pituitary gland (hypophysis) and profound underdevelopment of the pituitary. Considered a combined pituitary hormone deficiency (CPHD), PD results in deficiencies of growth hormone, thyroid stimulating hormone, prolactin, and the gonadotropins8. Given the systemic implications of multiple hormone deficiency, affected dogs experience a wide variety of clinical manifestations across multiple organ systems. By three months of age, affected dogs are obviously smaller than littermates. However, since puppies often leave the breeder for their new family around two months of age, their smaller stature may go unnoticed until they are in their new homes. In addition to stunted growth, other musculoskeletal abnormalities include delayed closure of growth plates, thin bones, atlanto-axial instability, and muscle atrophy9.

Problems with the skin and hair coat are common with PD. Affected dogs typically retain their soft puppy coat and fail to grow primary guard hairs as they age. Bilateral symmetrical alopecia is common on the trunk, neck and extremities. Skin may be thin and may become hyperpigmented and/or wrinkled. Bacterial skin infections (sometimes recurring) are also described. Affected dogs are also typically infertile, suffer from progressive kidney disease, and may be described as ‘mentally dull’.

Given that their lifelong puppy-like appearance is often considered cute by the public, German shepherds with PD are occasionally seen on media outlets as human interest stories. Sadly, it is not all cuteness for these dogs. Without treatment, affected dogs face a significantly shorter lifespan than normal littermates (typically dying or being humanely euthanized by 3 to 5 years of age). Although treatment with hormone supplementation can improve and extend quality of life, the long-term prognosis of affected dogs remains guarded. Therefore, preventing PD by testing breeding pairs and using results to make breeding decisions will remain crucial to prevent PD in German shepherd dogs going forward.

If you have any additional questions or concerns about any of our testing or how Paw Print Genetics can help you in your veterinary practice, please feel free to contact us at AskUs@pawprintgenetics.com or call during normal business hours (8 am to 5 pm Pacific time, Mon. to Fri.) to speak with one of our geneticists or veterinarians!