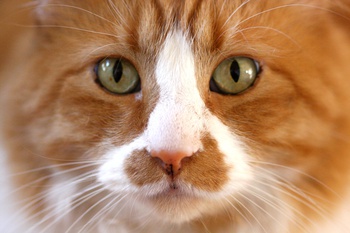 The popularity of genetic health testing in domestic animals is rapidly increasing for a variety of different applications. Although genetic testing of dogs has been more widely recognized by the public than similar testing in cats, advancements in genetic testing are also becoming increasingly popular among those that have a special feline in their life. In order to address the genetic health concerns of our cat-loving friends and their wonderful felines, the team at Paw Print Genetics has developed the CatScan, a powerful genetic screening tool for inherited diseases and traits. Aside from its important use by feline breeders to make informed breeding decisions and to prevent the production of kittens with certain inherited diseases, the CatScan also has powerful applications in clinical veterinary medicine especially in cases where testing is performed early in a cat’s life or when the cat’s pedigree is unknown.

From a technical perspective, the CatScan can be performed using cheek swabs from kittens of any age as long as it is possible to prevent contamination of their DNA sample with DNA from other cats or mother’s milk. However, testing kittens early (around the beginning of weaning) is a common and useful practice from a veterinary perspective as many inherited diseases diagnosed through genetic testing at that time, may not result in obvious clinical signs until later in life. Knowledge that a cat is affected with a disease that will not show signs until the future can allow owners to effectively monitor the health of their cat while preparing for the eventual life changes, treatments (if available), financial obligations, and difficult decisions which will come as the first clinical signs of disease appear.

Sometimes test results obtained from the CatScan can uncover the importance for ongoing health monitoring in an individual. For example, the CatScan includes testing for two independent genetic mutations of the MYBPC3 gene, each associated with feline hypertrophic cardiomyopathy (HCM). Both of HCM are inherited in a dominant fashion with incomplete penetrance. This means that cats which inherit one copy of either of these mutations from their parents are at an increased risk of developing HCM as they age. However, not every cat that inherits one of these mutations goes on to develop HCM. Therefore, ongoing cardiac monitoring of at-risk cats is crucial for early implementation of medical therapy and better long-term health outcomes when the first signs of HCM become apparent

Some diseases identified by the CatScan have effective preventative measures or treatments which can be implemented immediately to greatly reduce the clinical signs of disease or prevent more serious complications. For example, the CatScan contains testing for six genetic mutations associated with inherited cystinuria. Though it is known that cats affected with cystinuria will continue to excrete excessive amounts of cystine in their urine even with treatment, immediate implementation of dietary changes and regular urinary health monitoring may play an important and effective role in preventing cystine stone formation and life-threatening urinary obstructions.

Some diseases such as those resulting in problems with blood clotting or drug metabolism are particularly concerning in the veterinary hospital where surgery or medical treatments with certain drugs may prove disastrous for affected cats. The CatScan includes testing for two genetic mutations associated with hemophilia B, a disease which may go undetected if the cat has not yet had surgery or suffered a traumatic injury. In addition, the CatScan also includes testing for a genetic mutation in the feline ABCB1 gene which is associated with dysfunctional drug metabolism known as multiple drug resistance (MDR). Similar to a condition in dogs often referred to as multidrug resistance 1 (MDR1), cats with MDR, can display severe neurological disease when given standard treatment doses of medications transported by P-glycoprotein including the macrocytic lactones, butorphanol, acepromazine, and other drugs used in feline medicine. In a nonbiased sampling of over 100 cats, 5% were found to have inherited at least one copy of the mutation associated with MDR.

Finally, the CatScan also includes feline blood type testing to determine the blood serotype (A, B, or AB/C) of individual cats to gain information to be reviewed for future blood transfusions and to anticipate and prevent cases of potentially lethal neonatal isoerythrolysis (NI) which may occur when queens with type B blood attempt to nurse kittens with either the A or AB blood type.

Genetic test results obtained with the CatScan can be a powerful adjunctive tool for feline veterinary practitioners by providing evidence to support early disease monitoring for some conditions and by allowing for earlier diagnosis and treatment for others. If you have questions regarding the CatScan or any of the individual tests offered on the CatScan, please feel free to contact our knowledgeable Paw Print Genetics staff via email (ContactUs@MyCatScan.com) or phone (509-483-5950) during regular business hours (Monday to Friday; 8 am to 5 pm Pacific time).

Fall Safety for You and Your Pup