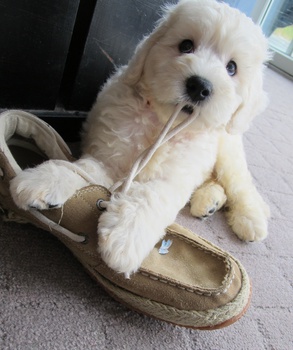 Your dog is not spiteful. In fact, I would dare to say that NO dog is spiteful. However, it’s pretty easy to feel like this might be the case if your dog predictably takes their own trip to Destruction Town nearly every time you leave them alone. The urine and feces on the floor, chewed up furnishings, carpet, doors, and other personal items are all the evidence you need to convince you that your dog was bent on revenge for leaving them in solitude. Even though it may feel personal, in actuality, this destruction might just be a sign that your dog suffers from a treatable disorder known as separation anxiety (SA), which happens to be most common in dogs which are highly bonded to their owners.

What is Separation Anxiety?

Certified Applied Animal Behaviorist, Dr. Suzanne Hetts, lists SA among the most common of 12 common causes of destructive canine behavior. It has been described as a “behavioral disorder of dogs when left alone or separated from their owner” (2). Though not exclusive to dogs with SA, many affected dogs are also described as being “hyperattached” to the owner. Affected dogs are often found to follow their owner from room to room, consistently lean or lie on them, beg for their owner to hold them, and make significant effort to sleep with them. Interestingly, many dogs with SA are otherwise very emotionally stable, friendly, and unproblematic in the presence of their owner. However, affected dogs frequently become anxious, destructive, and physiologically panicked in response to the owner’s departure cues and separation.

Owner’s departure cues can include picking up car keys, changing clothes, putting on a coat, or even verbal cues such as saying goodbye. Signs of distress to these cues may be obvious, such as restlessness, excitement, clinging to the owner, hyperventilation, or excessive salivation. However, other dogs may become reclusive and hide when the owner is getting ready to leave. A small subset of dogs may even aggressively bite the owner or the owner’s clothing in a seemingly last ditch effort to prevent the separation.

Once the owner leaves the house, the behavior of affected dogs can vary significantly in scope and severity. In many cases, the most severe distress occurs immediately upon the owner leaving. This distress may or may not wane as the length of separation increases. Dogs with SA often vocalize loudly after their owner’s departure. These barks and whines are often of higher pitch and different character than their normal vocalizations and are similar to distress calls of puppies (1).

Destructiveness is a common finding with SA. Dogs will often chew up or soil items marked with the owner’s scent such as clothing, bedding, and furniture. In addition, they may damage the door their owner exits from or the window they use to watch the owner leave. Some dogs may break teeth or otherwise injure themselves by trying to escape from their crate or kennel. Despite being housetrained, affected dogs often inappropriately urinate or defecate in their owner’s absence, sometimes even eliminating in their crate or bed (an unusual behavior for most dogs). Diarrhea is a common phenomenon, likely due to the physiological changes associated with the extreme stress of the separation. Destruction has been linked to inappropriate exploratory behavior in an effort to find the owner (1). Some dogs only display their anxiety through self- destructive behaviors such as excessive licking or chewing of limbs to the point of creating sores and infections.

When owners return home, dogs affected with SA will often display overexuberant and prolonged greeting behavior including circling, barking, howling, and jumping which tends to be far greater in intensity and length of time than the greeting of unaffected dogs.

After ruling out potential medical causes of behavioral concerns, veterinary behaviorists’ first step in SA treatment often centers around educating owners about their dog’s maladaptive behavior. Therapies for SA involve strategies to decrease the dependence of the dog on its owner. Some common approaches involve modifying the owner’s response to attention seeking behaviors, creating a safe and comforting environment in which to leave the dog, and by desensitizing the dog to departure cues. When necessary, medications in combination with behavioral therapy have been shown to be particularly helpful in controlling SA (2). A board-certified veterinary behaviorist is a fantastic resource for the owner of a dog suspected of having SA. Unfortunately, there are fewer than 100 veterinary behaviorists currently working in the United States. If a veterinary behaviorist is not available in your area, general veterinary practitioners and certified dog trainers are other helpful resources.

The frequent destruction of property by dogs suffering from SA can quickly become unacceptible, even for the most compassionate owners. The belief that a dog is attempting to get revenge on their owner for leaving them alone is a common misconception, that can further damage the human-canine bond and make improvements in behavior difficult to achieve. Punishments directed at a dog with SA are not only typically unhelpful, they can also induce more anxiety and fear, thus making the problem worse. Luckily, professional behavioral therapy and consistent implementation of these techniques have been proven to dramatically decrease the anxious, destructive behavior associated with SA and is bound to strengthen the bond you share with your dog. Although SA behavioral therapy requires commitment and patience from the owner, when done appropriately, the dog you once determined to be full of spite, can become the less anxious, well-mannered best friend you’ve always known they were inside.

This column is not intended as a replacement for personalized veterinary care.  Please consult your veterinarian for medical advice regarding your pets

Does Your Dog Suffer from Noise Anxiety?