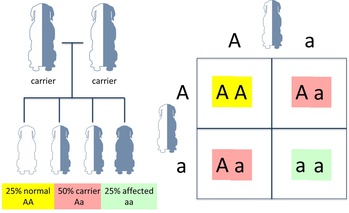 Genetics play an enormous role in the health of dogs walking through the doors of any veterinary hospital. However, the treatment of an animal with an inherited disease rather than proactive testing of the genetic mutations responsible for disease has been the traditional role of the veterinarian. With an increase in the availability of canine genetic disease testing and great improvements in the ease and convenience of ordering genetic testing through Paw Print Genetics, more and more dog breeders and their clients are having genetic testing performed preemptively and learning the benefits of these powerful technologies. As a veterinarian, understanding the basics of genetic testing and how genetic test results can be used to prevent and diagnose disease will keep you current and prepared for your clients as these technologies inevitably become a more significant part of clinical veterinary practice.

One of the more challenging but important aspects of canine genetic testing is deciding what recommendations to make when a dog or one of its relatives are found to be at risk for (or affected with) an inherited disease. Appropriate testing recommendations for the relatives of affected dogs may be crucial for prevention of additional affected puppies and identification of other dogs that may also be at risk of disease.

A pet owner arrives at your veterinary hospital with their young dog, Lucky and tells you that they were recently informed by Lucky’s breeder that one of Lucky’s littermates, Hope, has been diagnosed with an autosomal recessive inherited disease. Lucky has been completely healthy, but the client is obviously concerned that he is at risk. The client would also like to hear what genetic testing recommendations you would have for Lucky and Hope’s breeder. You conduct some online research and discover that the genetic mutation causing the disease is known for the breed and genetic testing is available. In order to make the most appropriate genetic testing recommendations for Lucky’s relatives and to fully understand Lucky’s risk for this disease, one has to consider how the disease is inherited, its age of onset, and whether or not the disease displays variability in the way it is physically expressed.

Genetic diseases can be inherited in a variety of ways (here’s a quick refresher). However, diseases inherited in an autosomal recessive fashion, such as the one described here, are most common. If the disease Hope is diagnosed with is autosomal recessive, by definition, both of Lucky and Hope’s parents would have to carry at least a single copy of the mutation and Hope would have inherited one copy of the mutation from each of her parents.  However, depending on the disease and its clinical presentation, it is possible that one or both of Lucky’s parents could also be at risk for, or affected with, the same disease without obvious clinical signs.

Some recessive inherited diseases display a phenomenon known as variable expressivity in which individual dogs affected with the same disease display variability in disease severity, age of onset or in the clinical signs associated with the disease. One example of a common canine disease displaying variable expressivity is the clotting disorder known as von Willebrand disease I (vWDI). Though it is understood that dogs need to have inherited two copies of the associated mutation to display the characteristic problems with clotting, some dogs have such a mild phenotype that they can go undiagnosed for years.

Other recessive inherited diseases display significant variation in their age of onset. One example of such a canine disease is a form of progressive retinal atrophy known as cone-rod dystrophy 4 in which affected dogs have been described to develop disease between 1 and 15 years of age. Therefore, using our example, it would be entirely possible for Hope to develop clinical signs of this type of disease long before her parents or other littermates might.

Recessive diseases are particularly troubling for breeders because dogs inheriting a single copy of a disease-causing mutation (“carriers”) do not show signs of the disease, but can produce puppies with the disease if bred to another carrier of the same mutation. Based upon statistics, the breeding of two carriers results in a combination of all possible genotypes in their litter; approximately 25% “clear” (no copies of the mutation), 50% carriers (one copy of the mutation), and 25% at risk/affected (two copies of the mutation). Therefore, all littermates of a dog affected with a recessive disease should also be tested to understand each individual’s risk. When dealing with a recessive disease that displays variable expressivity, it would also be strongly indicated to test the parents of affected puppies as they may not yet show obvious clinical signs of the disease their puppies have inherited. Lastly, determining whether the parents have inherited one or two copies of the associated mutation is crucial in preventing additional affected puppies.

Preventing Inherited Disease Before It Happens

When it comes to genetic diseases, Ben Franklin had it right when he stated, “An ounce of prevention is worth a pound of cure.” In a perfect world in which every dog breeder performed genetic disease testing on their breeding stock and made selective breeding decisions using these results, diseases caused by over 200 known canine genetic mutations could be completely prevented. Therefore, recommending extensive genetic testing to your dog breeding clients might be one of the most impactful recommendations you will make all week!

If you have questions about how Paw Print Genetics can help you in your veterinary practice or if you have general inherited disease related questions, please feel free to contact us at AskUs@pawprintgenetics.com or call our laboratory at 509-483-5950 (Monday through Friday, 8 am to 5 pm Pacific time) to speak to one of our knowledgeable geneticists or veterinarians.