Tweet
by Casey Carl on Oct. 4, 2018 in The Veterinarian's Corner 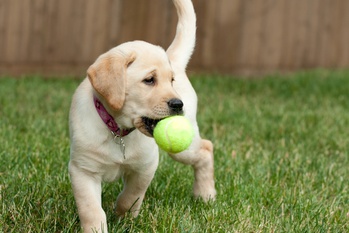 Discovery of disease-associated, canine genetic mutations has greatly increased over the past two decades. As a result, identification of these mutations through genetic testing has quickly become a useful tool for dog kennels and veterinary practices by allowing for the identification of asymptomatic disease carriers, diagnosis of affected dogs, and prevention of inherited diseases through informed breeding practices. However, because mutation discovery is often funded by specific breed clubs with interest in a breed-related disease concern, study investigators may not perform extensive, species-wide population studies for a newly discovered mutation. Therefore, in many cases, additional breeds inheriting the same mutation (and developing the same disease) may remain unknown for quite some time after the initial discovery.

As any modern veterinarian can attest, for better or worse, animal lovers have more veterinary medical information at their fingertips than ever before. Occasionally, at Paw Print Genetics, we are contacted by breeders or owners whose veterinarian had opted not to pursue a diagnosis that the client suspected because of the veterinarian’s historical understanding of a disease’s breed-specific distribution rather than the current knowledge. For veterinarians building a differential diagnosis list, keeping the mind open to a particular inherited disease manifesting in an unexpected breed, may be crucial in getting an early, accurate diagnosis. Because, as my internal medicine professor from veterinary school used to remind us, “You are only as good as your differential list.”

The Importance of Time

Errors occurring during the natural repair of damaged DNA or during cell division (e.g. DNA replication or chromosomal segregation) are commonly cited mechanisms resulting in genetic mutations. However, the historical time period in which the original mutation occurred is one of the most important factors when considering the potential number of breeds affected by a specific disease-associated mutation. Mutations originally occurring in early canine ancestors can often be identified in multiple (sometimes MANY) modern, apparently diverse breeds due to their role as founders for the large number of unique breeds created by humans through intense selective breeding. In contrast, more recent genetic mutations occurring since the implementation of closed breed studbooks may only be identified in a single breed due to a lack of interbreed reproduction.

In some cases, mutations may be introduced to a breed through accidental or intentional breeding in which a dog from one breed reproduces with a dog from another. This scenario is particularly concerning if offspring are then bred back to one of the original breeds as only a few generations are necessary before the dogs produced from this mixed breed line become nearly imperceptible in appearance from the most prominent breed (but now harbor the new mutation). Regardless of its origin, once a mutation is present in a breed, unchecked spread of the mutation can quickly lead to catastrophic consequences. This is particularly true when popular sires harboring undetected, deleterious mutations are used as the male genetic flagbearer for hundreds or thousands of future offspring (referred to as “Popular Sire Effect”).

Three examples of common autosomal recessive diseases once attributed to a particular breed, but now identified in dozens of additional breeds are: degenerative myelopathy, von Willebrand disease type I, and exercise-induced collapse.

Most veterinarians graduating prior to 2009 probably learned about degenerative myelopathy (DM) in a single dog breed, the German Shepherd Dog (GSD). This is the year that a mutation in the canine SOD1 gene was discovered and implicated as the cause of this late-onset, neurological condition resulting in progressive ascending paralysis of GSDs. However, it didn’t take long to realize that other breeds had also be suffering with this recessive condition as multiple publications have since described this mutation in well over 100 dog breeds. Interestingly, these findings have also led to the understanding that for undetermined reasons, DM displays variable penetrance. In fact, in some cases, SOD1 homozygous mutants may never develop the classic clinical signs of DM, even after reaching advanced age. Interestingly, however, investigators using immunohistochemistry in a  2015 Japanese study found that homozygous mutants reliably had excessive amounts of aggregated protein present in neurons (a consistent feature of DM) even in situations where the dog was asymptomatic. Thus, indicating that other genetic or environmental factors may slow the progression of disease in some individuals.

In 2004, a specific mutation of the canine VWF gene was associated with von Willebrand disease type I in the Doberman Pinscher. However, since then, over 20 breeds have been identified to inherit the mutations associated with this congenital clotting disorder including individuals from a rare dog breed known as the Drentsche Patrijshond or Dutch Partridge Dog which were identified at Paw Print Genetics and published in the journal, Vet Record Case Reports. Unfortunately, there are still many breeds for which the underlying genetic factors associated with von Willebrand disease are unknown. It is possible that some of these breeds are harboring the same mutation found in the Doberman but are yet to be identified through genetic testing or may harbor a different mutation in the VWF gene that presents similarly to vWD type I. Variability in penetrance makes some dogs with this type of von Willebrand disease much more susceptible to clinically relevant clotting problems than others, further complicating diagnosis and mutation discovery.

Investigators from the University of Minnesota published a study in 2008 describing a genetic mutation of the Labrador retriever DNM1 gene which was strongly associated with a neuromuscular disorder termed exercise-induced collapse (EIC). Dogs affected with EIC showed signs of hindlimb weakness often progressing to temporary paralysis and collapse beginning shortly after the initiation of strenuous exercise. Though most affected dogs recovered to a normal state within 30 to 60 minutes of a collapse, rare deaths during these episodes were also reported. Since this discovery, over a dozen breeds including the closely related Chesapeake Bay and Curly-coated retrievers, and more recently the Clumber Spaniel, have been confirmed to develop this disease due to the same DNM1 mutation. Like both degenerative myelopathy and von Willebrand disease, EIC displays some degree of incomplete penetrance meaning that not every dog with two copies of the associated mutation will go on to develop signs of EIC. However, it is possible that some of these “asymptomatic” homozygous dogs would develop clinical signs if exercised at high intensity for an extended period.

Thinking Beyond a Single Breed

The examples discussed here are just three of many canine inherited diseases first described in a single breed, only later to be recognized as a concern in others. Searching the extensive list of genetic testing available at Paw Print Genetics by disease, breed, or clinical signs and submitting a DNA sample for testing may prove helpful in making a diagnosis in difficult inherited disease cases.

Paw Print Genetics remains active in staying up to date on the latest information about breeds at risk of inheriting the known canine mutations. In some cases, including diseases arising in mixed breed dogs or rare breeds which have not been studied, a genetic screening test such as the Canine HealthCheck may be particularly helpful in the pursuit of a diagnosis. By screening for over 150 different canine mutations at the same time, the Canine HealthCheck allows for a broad examination of the genome for diseases known to be inherited by hundreds of different breeds, but potentially unknown in the breed in question. Screening rat terriers with the Canine HealthCheck allowed Paw Print Genetics to be the first laboratory to recognize that the mutation for progressive retinal atrophy, progressive rod-cone degeneration (PRA-prcd) was present in this breed that had never before been screened for this particular mutation.

Given the relatively limited knowledge about distribution of many canine mutations, clinical veterinarians may benefit from keeping all potential inherited diseases on their differential list, regardless of breed, until proven otherwise. As the examples above have shown, limiting the list of differential diagnoses for an inherited condition, due to a dog’s breed, may prove detrimental in establishing an early and accurate diagnosis. If you have questions about a known or suspected inherited disease presented to you in practice, please feel free to contact our knowledgeable and friendly Paw Print Genetics veterinarians and geneticists at AskUs@pawprintgenetics.com or give us a call at 509-483-5950 during normal business hours (Mon. through Fri.; 8 am to 5 pm Pacific time) to speak to one of them in person.