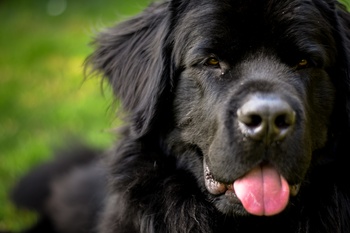 From its early history as a North American working dog used to retrieve fishing nets and perform human water rescues, the beautiful and intelligent Newfoundland dog has carved out a well-deserved place in the heart of dog lovers around the world. Their characteristic large size, marked by heavy bones, powerful musculature, webbed feet, and thick hair coat make the Newfoundland particularly adept at tasks involving swimming. However, they are just as capable and content pulling carts on land and performing other land-based tasks. In addition, their generally calm, loyal, and affable temperament have helped establish them as great family dogs.

Over the years, Newfoundland breeders have selectively bred dogs that have displayed the most desirable characteristics in an effort to improve their breed. Unfortunately, alongside these desirable traits, sometimes the predisposition to produce offspring with certain inherited diseases are also silently passed from generation to generation in the form of genetic mutations. Such a genetic mutation found in the canine SLC3A1 gene (first described in 2000) is responsible for a potentially life-threatening condition in the Newfoundland known as cystinuria. Luckily for Newfoundlands and those that love them, cystinuria can be eliminated from most blood lines through the incorporation of genetic testing for this mutation into selective breeding practices.

Urine from normal dogs contains a very small quantity of the amino acid cystine because kidneys play an important role in reabsorbing amino acids from urine prior to the urine leaving the kidneys in route to the bladder. Newfoundlands affected with cystinuria are born with a kidney defect which prevents them from effectively reabsorbing cystine from urine as they normally would. Thus, affected dogs pass increased concentrations of cystine in the urine as early as 2 days of age and are predisposed to forming cystine crystals and stones in the urinary tract. Stones most commonly form in the bladder leading to chronic inflammation of the bladder walls, blood in the urine, and an increased risk of urinary tract infections. Stones forming in the ureters of affected dogs cause obstructions preventing urine flow from the kidneys to the bladder requiring emergency intervention to prevent subsequent kidney damage on the obstructed side of the body. Lastly, stones which either form or become lodged in the urethra often lead to complete obstruction of the urinary tract preventing urination; a life-threating situation which requires immediate treatment to prevent serious complications.

Though males and females are equally affected by cystinuria in terms of the quantity of cystine which is passed in the urine, male dogs are much more likely to develop urinary obstructions due to the longer and narrower characteristics of the male urethra. Symptoms of urinary problems or obstruction may appear as early as 6 to 8 months of age in male dogs and typically later (if ever) in females. In addition, not all dogs which pass increased quantities of cystine in their urine develop urinary stones. The reason some cystinuria affected dogs are more likely to develop urinary stones is not well understood. Therefore, the most reliable way to prevent cystinuria complications is through preventing the disease altogether by performing genetic testing on dams and sires for the associated mutation prior to breeding and by using the results to make informed, selective breeding choices.

How is Cystinuria Inherited?

Cystinuria is inherited in a recessive manner meaning that dogs must inherit two copies of the associated mutation (one from each parent) in order to develop disease. Dogs inheriting only a single copy of the mutation are considered carriers of cystinuria and do not develop signs of the disease themselves. However, carriers are at risk of producing affected dogs if bred with another carrier of the same genetic mutation. In order to avoid producing affected puppies, carriers should only be bred to dogs that have not inherited the associated SLC3A1 gene mutation. As with most inherited diseases, it is not generally recommended to breed affected dogs.

Paw Print Genetics offers testing for cystinuria (Newfoundland type) as well as two other genetic diseases of the Newfoundland. If you have questions about how to eliminate cystinuria from your bloodline or have general canine genetics questions, please feel free to contact our laboratory at AskUs@pawprintgenetics.com or give us a call at 509-483-5950 (Mon. through Fri.; 8 am to 5 pm Pacific time) to speak to one of our veterinarians or geneticists.