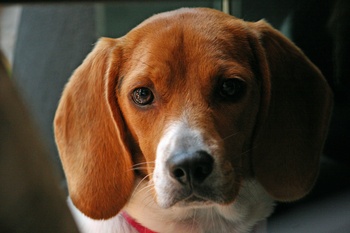 While the history of the beagle’s early breed development has been lost due to lack of record keeping, the mid to late 1800’s saw the arrival of the modern beagle on the shores of North America. From its English homeland where it was developed to hunt rabbits and other small game, the beagle has become one of the most popular breeds in the United States, ranking 4th overall in the 2013 American Kennel Club’s registration statistics. Behind their charming, deep throated vocalization known as baying, lies a social, even tempered and jovial dog breed suited for modern family life. Unfortunately, like other purebred dogs, the beagle is known to inherit some genetic diseases that can dampen the spirits of this normally energetic and fun-loving breed. One such inherited disease of beagles is known as Musladin-Lueke syndrome (MLS), a multi-systemic disease of connective tissue.

Named after beagle breeders Tony and Judy Musladin and Ada Lueke, MLS was first reported in the 1970’s and has now been identified in multiple countries including England, Australia, America and Japan. In 2010, a genetic mutation in the ADAMTSL2 gene was found to be responsible for the unique clinical signs of this disease. Though not lethal, this mutation causes abnormally fibrous connective tissue that is particularly obvious in the skin and joints. Affected dogs are identified shortly after birth with stiff, immobile joints causing puppies to walk on their tip-toes in a “ballerina walk”. Their outer toes are typically shorter than normal and many affected dogs display a characteristic crease in their ears. In addition, affected dogs have tight skin (with little scruff), a flat skull, and a unique facial appearance marked by slanted eyes. Though life expectancy of affected dogs is normal, they tend to be smaller in stature than normal dogs and arthritis is common as they age due to the abnormal forces placed upon their joints. Clinical progression of disease stabilizes around 1 year of age, but affected dogs will display clinical signs for life.

MLS is inherited in a recessive fashion meaning that affected dogs must inherit two copies of the mutation (one from each parent) in order to develop disease. Dogs inheriting one copy of the mutation are considered “carriers” of MLS and do not show clinical signs of disease. However, if bred with another carrier, about 25% of the puppies would be affected with disease and 50% would be carriers. Genetic testing for the associated mutation is crucial in identifying carrier dogs and allows for complete prevention of MLS through informed selective breeding. In order to prevent the production of affected puppies, carriers of MLS should be bred to dogs that did not inherit a copy of the mutation. Affected dogs should not be bred.

MLS testing is listed as a breed specific requirement on the Canine Health Information Center website. Paw Print Genetics offers genetic testing for Musladin-Lueke syndrome and seven other inherited diseases reported in beagles. If you have questions about inherited diseases of beagles or any breed, feel free to contact us at AskUs@pawprintgenetics.com or call our informative staff at 509-483-5950.

The Newfoundland, the PICALM gene, and the SAS Controversy