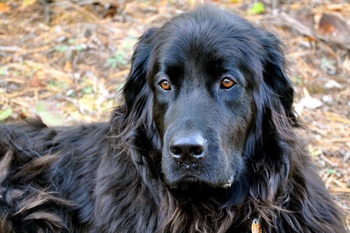 Subvalvular aortic stenosis (SAS), one of the most common inherited cardiac diseases in dogs, is a major concern for many owners of large breed dogs including the Newfoundland, golden retriever, American Staffordshire terrier and Rottweiler. SAS is caused by an abnormal ring or ridge of tissue in the left ventricle of the heart resulting in a partial obstruction of the left ventricular outflow tract; the pathway that allows blood to flow from the left ventricle, through the aortic valve and into the aorta which carries oxygenated blood to the body. In mild cases, dogs live a normal life, free of clinical signs related to the vessel narrowing. However, in moderate to severe cases of SAS, the increased strain placed upon the heart to pump blood through the partially obstructed aortic valve can result in structural changes of the heart muscle, congestive heart failure, arrhythmias and sudden death. SAS also predisposes dogs to development of potentially lethal bacterial infections of the aortic valve. Unfortunately, it is not possible to predict the severity of disease in puppies by examining the hearts of affected parents. Mildly affected parents can have severely affected puppies and vice versa. On average, SAS-affected dogs only live to about 4.5 years of age, though lifespan of affected dogs is variable between breeds and depends upon severity of disease. In one study, the average age of death from “severe” SAS was 19 months.

The Newfoundland and a test for SAS

In June 2014, a study conducted by Joshua Stern and colleagues was published describing a genetic mutation in the PICALM gene significantly associated with SAS in the Newfoundland. This study described Newfoundland SAS as an inherited disease that displayed incomplete penetrance, meaning that not every dog that inherited the mutation would develop the condition. However, it was reported in this study that dogs with the mutation were 14.5 times more likely to develop SAS than a Newfoundland that did not inherit a copy of the mutation. To the delight of Newfoundland breeders, the discovery of a mutation associated with SAS meant that genetic tests could be developed to screen breeding dogs and eliminate dogs with an increased risk of disease from their breeding programs. That study also found the mutation in other breeds, including one dog each in German shepherds, golden retrievers and American Staffordshire terriers.

Other Breeds and the PICALM gene mutation

After becoming aware of the reported SAS-associated PICALM mutation reported by Stern, the scientific team at Paw Print Genetics developed a test to identify dogs carrying this mutation. As we began testing dogs, we also discovered the same PICALM mutation in several dog breeds including the Newfoundland, Golden retriever and American Staffordshire terrier. While many of these breeds were known to develop SAS, Paw Print Genetics began to uncover apparent heterogeneity among the breeds, with some affected dogs showing the mutation, while other affected dogs did not. This pattern could be consistent with the reported incomplete penetrance, may indicate that there is more than one mutation in a breed that causes SAS, or could indicate no correlation between the known mutation and SAS.

A New Publication and Controversy

As is true with any inherited disease displaying incomplete penetrance, correlation between mutation and disease becomes more difficult than if a mutation resulted in disease 100% of the time. Because dogs don’t always have clinical signs of diseases displaying incomplete penetrance even when they inherit the mutation, large numbers of dogs must be evaluated to identify whether dogs inheriting the mutation truly have a statistically increased risk of disease. In addition, it is important for these dogs to be unrelated because related dogs will not only share the mutation in question, they also share many other genes and could share other inherited causes for the disease. Thus, using related dogs complicates the important statistical analysis required to define a causal relationship between a mutation and a disease.

A new study by Michaela Drögemüller and colleagues published online November 13, 2014, disputes the findings of the Stern publication.  In this new study,  Drögemüller and coworkers provide evidence that excludes the PICALM mutation as the causative gene in SAS. Drögemüller’s conclusions are based on a number of facts. First, in a 2012 study, the medical histories and pedigree of over 200,000 Newfoundlands were examined and a dominant lethal mode of inheritance was concluded. Other concerns expressed by Drögemüller included inadequate use of control subjects in the Stern publication (dogs without SAS) and that a single family of 45 dogs was used in identifying the associated SAS mutation. Drögemüller and colleagues also screened 399 Newfoundlands and 500 dogs from 64 other breeds for the PICALM mutation. After finding mutations in affected and unaffected dogs in many breeds, it was concluded that the mutation was not the cause of SAS, but was instead a benign gene variant that occurred in high frequency in the Newfoundland and less so in other breeds.

After swift, but careful consideration of the data in both publications and the potential impact to our clients, Paw Print Genetics decided to discontinue offering the test for the mutation in the PICALM gene reportedly associated with SAS by Stern. The paper by Drögemüller and colleagues has created enough concern for our team to question the utility of the test at this time. Until further research is published, we feel that this decision to discontinue the test is in the best interest of our clients and their dogs.

Paw Print Genetics understands the potential ramifications that inaccurate genetic testing can have due to the unnecessary removal of dogs from breeding programs and the subsequent decrease of genetic diversity in a breed that may result. Paw Print Genetics relies on the peer-reviewed, published medical literature to make important decisions about the development of new tests. As more canine mutations are discovered and reported, it is possible that some of these will be disproven by other teams of scientists attempting to replicate the findings. We will continue to stay up to date on the latest publications and work to make our test offerings useful and the results meaningful to help you take the best care possible for your dogs.

If you have questions about SAS or the PICALM gene mutation, please contact us via email at AskUs@pawprintgenetics.com or call us at 509-483-5950.

Polyneuropathy: A Preventable Inherited Disease of the Greyhound

Musladin-Lueke Syndrome: A Preventable Inherited Disease of the Beagle