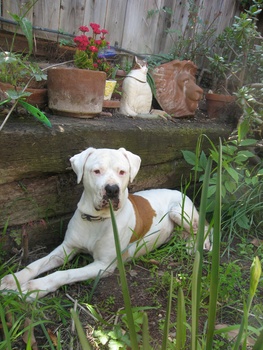 The neuronal ceroid lipofuscinoses are a group of inherited lysosomal storage disorders.  Lysosomes are structures in cells referred to as the stomach of the cell that breakdown waste products and other byproducts in the cell.  NCL affected dogs lack one of several enzymes necessary for the normal breakdown of certain types of fat or protein in the cells (called lipopigments.)  As this "debris" accumulates in neuronal cells (and to a lesser extent in other cells), the animal's mental and motor functions deteriorate.

Dogs with NCL start out as apparently normal and fully functional dogs.  Depending on which subtype of NCL they have, they will begin developing symptoms anywhere from 6 months to 4-6 years of age (for the adult onset varieties).  NCL is found in both humans and dogs as well as other species and share symptoms that include a progressive loss of mental and physical nervous system functions.    These exhibit as mental/intellectual decline and motor disturbance progressing to seizures, motor problems such as lack of muscle coordination, abnormal gait, difficulty balancing, visual disturbances progressing to blindness and behavioral changes including aggressiveness, dementia, aimless wandering behavior with episodes of confusion, depression and ultimately death.  The age of onset, rate of progression, age at death and the order in which symptoms appear depends on the particular disease.   This link illustrates some of the realities of an NCL affected dog.

At least 7 forms have been identified thus far in dogs affecting six different genes.   Each is recessively inherited and testing is available for most of these. Various forms of NCL has been documented in the Dachshund, English setter,  Australian shepherd, American bulldog, Tibetan terrier, border collie, Polish owczarek nizinny (PON)/Polish lowland sheepdog, chihuahua and Labrador retriever with genetic testing for the causative gene mutation in the first six of these breeds. Dogs of other breeds have presented with NCL of unknown etiology.

You will hear many people in a breed say that "they have never heard of such a problem in the breed", or "that is only in the European dogs"/or "Australian dogs" or it is just in THOSE lines.  For instance, in border collies people will state that NCL "is primarily in the Australian lines" and yet dogs were apparently diagnosed with the issue in the US prior to the importation of "those lines", border collies in Japan also have the gene mutation and 42 documented carriers are listed on the border collie health database.  Dogs from each of the other breeds have, at a minimum, been clearly documented in research laboratories and veterinary universities  to have NCL and/or the gene mutation..  Even if people in the breed have "never heard of dogs with the problem" the problem is there.  Unfortunately, when an "unknown" genetic disease occurs that no one is familiar with, it often goes undiagnosed, unrecognized and unreported.  Recessive genes can be passed for many generations without affected individuals occurring until two carriers are actually bred to one another. The only way to know if a dog from an at risk breed carries this gene is to do molecular diagnostic testing.  Based on the severity of this group of diseases and the heartbreak involved in watching a once healthy dog slowly deteriorate, people may want to seriously consider testing regardless of not being aware of affected dogs "in the line".  As discussed in my recent Health Guarantee blog, disorders are not always readily recognized without "special testing" or without caregivers being specifically aware of what they are looking for.  Paw Print Genetics offers genetic testing for six of the seven known mutations causing NCL.