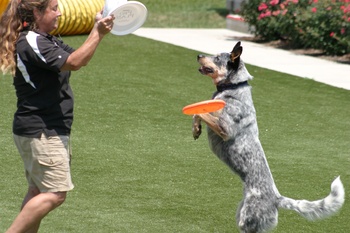 It’s often thought that dogs see in black and white – or shades of gray. That common thought isn’t completely true. While dogs do see shades of gray, they also see hues of blues and yellows. In humans, they’re somewhat comparable to a male who is red-green color blind.

In an article by Dr. Donna Spector, the vision of both dogs and cats is broken down and explained very well. In short, dogs and cats both see better in low-light conditions than humans, with cats taking the crown as night stalkers, by picking up on motion and contrast.

Dogs have better peripheral vision than both humans and cats, with some breeds that have short faces and wide-set eyes, such as the English bulldog and pug, able to see in excess of 240-degrees around themselves. Canines also have better overall vision than cats – about 20/75 as compared to felines that score somewhere between 20/100 and 20/200.

Both cats and dogs pick up on motion in low light better than humans. They also see contrast between shades of gray better – which combine to both help and hinder dogs, depending upon the task at hand.

A hunting dog whose job it is to mark birds falling from the early morning sky, catches the motion very well and the contrast between sky and falling objects helps him track it all the way to the ground. But, a police dog that enters a room might not readily recognize a perpetrator standing still in a corner because of the lack of motion.

The color-sensitive cone receptors in a dog limit the color spectrum that it can see. It’s difficult for them to differentiate between reds, oranges, yellows and greens, which is why hunting-dog trainers will use brightly colored orange bumpers for retrieving drills when they want the dog to use more than its eyes or force him to focus on the handler and to challenge the dog’s nose. While a human can see a neon-orange bumper from a long distance, to the dog it just looks like a similarly colored gray bump along the ground.

Keep your dog’s ability to see in low-light conditions, especially moving objects and in high-contrast situations (such as a dark object falling against a lighter sky, or a white object like a bumper on a darker background such as green grass), when retrieving and evaluating his eyesight. If he’s having trouble picking out objects when playing or training, consider the contrast of the object with the surroundings. If, however, your dog is having difficulty seeing even high-contrast, moving objects or in low-light situations, consider getting its eyes checked. Many genetic mutations, from night blindness to progressive cone-rod dysplasia, exist in breeds as varied as the briard, cocker spaniel, bullmastiff and corgi.

Importance of Accuracy When Relying on Canine Genetic Testing