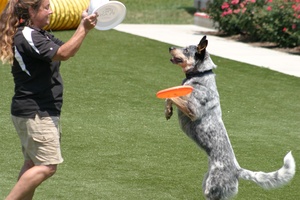 It’s often thought that dogs see in black and white – or shades of gray. That common thought isn’t completely true. While dogs do see shades of gray, they also see hues of blues and yellows. In humans, they’re somewhat comparable to a male who is red-green color blind.

In an article by Dr. Donna Spector, the vision of both dogs and cats is broken down and explained very well. In short, dogs and cats both see better in low-light conditions than humans, with cats taking the crown as night stalkers, by picking up on motion and contrast.

Dogs have better peripheral vision than both humans and cats, with some breeds that have short faces and wide-set eyes, such as the English bulldog and pug, able to see in excess of 240-degrees around themselves. Canines also have better overall vision than cats – about 20/75 as compared to felines that score somewhere between 20/100 and 20/200.

Both cats and dogs pick up on motion in low light better than humans. They also see contrast between shades of gray better – which combine to both help and hinder dogs, depending upon the task at hand.