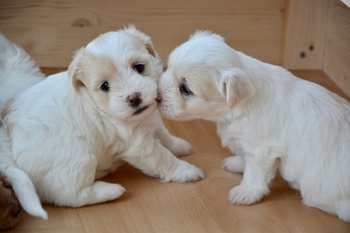 Canine genetic testing is somewhat of a mystery for non-scientists who are just starting to learn more about the ins and outs of the genetic world. I was recently given the opportunity to tour Paw Print Genetics’ state of the art laboratory and was amazed at what is possible to achieve with the sample after the simple act of swabbing a dog’s cheek.

During the tour, it dawned on me that one of the most important parts of the process of genetic testing is the moment when the cheek cells are being collected. Although the process itself is not complicated, it is still important to make sure to collect as many cells as possible and avoid collecting foreign matter that might interfere with the testing or confound the results. The cells that are being collected are dead skin cells, comparable to how we shed skin from our arms. It is a painless process for the dog but  might make them a little uncomfortable so having a friend help  collect the cells would be a good idea.

Optimal collection of cells  is achieved when the inner cheek surface is brushed for a slow count of 30 using the cyto-brushes provided by PPG or ones  purchased  from a store. The brush is mostly collecting cells, but they can also collect bacteria and food particles. If the dog has an infection there might be even more bacteria in the mouth.   So, pressing gently against the inside of the cheek and staying away from brushing against the teeth, will help ensure more cheek cells than bacterial cells during the collection process.

Because bacteria also have DNA, the collection of bacteria may interfere with the testing and in some cases, the laboratory may have to request a second sample because there is too much bacterial DNA as compared to dog DNA.  During the testing process, there are clues if the DNA is mostly bacterial, but these clues may not be apparent until the end of the testing process.  That’s why it is best to try to get the right sample the first time, to save precious time in analyzing your dog’s DNA. Rather than risk reporting a wrong result, Paw Print Genetics is not shy about asking for a new sample if the original sample provided looks compromised in any way.

To obtain the perfect cheek swab, insert the brush end of the swab into your dog’s mouth between the cheek and gums and press gently against the cheek.  Rub and roll that brush gently again the cheek, providing slight pressure to the outside, for a slow count of 30. Place the swab back into the original sleeve if you are using a kit provided by Paw Print Genetics, or place the swab into a clean envelope labeled with your dog’s name if you have provided your own swabs.  Then repeat the process with the other two swabs. No matter how many tests you are requesting from us, we need all 3 swabs returned. If you are in a hurry and want to make sure we are able to complete your testing the first time or are located outside of the U.S.A., you may want to send us 5 swabs per dog to help ensure that we have enough cell  to complete your testing.

Once the samples are in the lab, our technicians start their work. They carefully and methodically place all swab tips for each dog into an individual tube with a solution that will help remove the cells from the swab. Each dog is done separately and the technicians will sterilize their equipment between each dog. We use two identifiers when checking the samples against the tubes to make sure that dogs with similar identification numbers and names are not switched during sample preparation.

Then the “magic” happens. Our technicians prepare the different samples into groups and monitor their progress as the DNA is extracted from the cells and then tested for different disease or trait mutations. Technicians later analyze the data, report it to the directors who then review the data, sign the reports and certificates and upload the documents into your account.

In the end, the results on your dog’s DNA testing is what you use to make breeding decisions. Having a good sample is one of the most important step in the entire process.  Using all three swabs and carefully obtaining cheek swabs while trying to avoid bacteria, will provide our laboratory the large number of cheek cells that they need for a successful DNA extraction and successful testing results.

As complicated as genetic testing may be, the simplicity of swabbing your dog’s cheek can open a world of knowledge that can help a dog owner pick the healthiest pup, a breeder  eradicate certain diseases, a dog trainer prepare for a future illness and even help a veterinarian with a diagnosis. I am convinced; I say Yes to the Test!

Canine Safety - Are you prepared for a disaster?