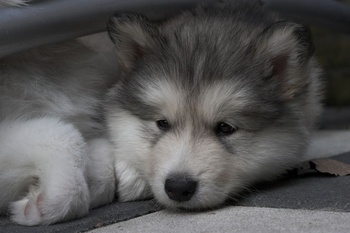 Throughout human history, people have learned to use a variety of animals to help perform essential tasks in an attempt to make their lives easier. While dogs are often recognized for their skill as hunters or as integral hunting companions in pursuit of a variety of game, one under recognized skill of dogs is as draft animals. While we often associate draft or sled dogs with competitive racing such as the Iditarod or Yukon Quest races, many do not realize that these races were developed from the historical use of dogs as draft animals. One dog breed with significant roots as both a hunting and draft animal is the Alaskan malamute.

Early accounts describe ancestors of the Alaskan malamute being used by the native Alaskan tribe previously known as Mahlemuts. These dogs played a crucial role in helping the tribe succeed in the harsh and unforgiving land of northwestern Alaska by assisting them with hunting and pulling sleds. When gold fever struck the Yukon and Alaska in the 19th century, demand for malamutes and other capable draft dogs increased substantially to assist hopeful prospectors in their quest for a golden fortune. Often confused with the Siberian husky due to their similar appearance, to the informed eye the Alaskan malamute can be easily identified by their larger, big boned structure and lack of blue eyes (a common eye color of the Siberian husky) among other unique physical and personality traits. Despite their sharp minds, strong bodies, and tremendous physical endurance, like other purebred dogs, Alaskan malamutes are known to inherit some genetic diseases that may make them less suitable to carry out their instinctual drive to hunt and run. A mutation in the NDRG1 gene is responsible for causing one such potentially debilitating disease known as Alaskan malamute polyneuropathy (AMPN).

AMPN is a progressive neuromuscular disease presenting in affected dogs between 3 and 19 months of age. Affected dogs commonly present with a combination of unusual, high-pitched breathing sounds (stridor), exercise intolerance, and loss of hind limb muscle coordination. Over time, affected dogs will develop severe limb and spinal muscle atrophy and develop a “bunny hop” gait due to pronounced hind limb weakness. In some circumstances, dogs will develop weakness in all four limbs. While some dogs may appear to partially recover and live a normal lifespan with variable amounts of physical impairment, affected dogs are frequently euthanized due to disease severity and significantly decreased quality of life.

AMPN is inherited in a recessive fashion meaning that dogs must inherit two copies of the associated NDRG1 gene mutation (one from each parent) in order to develop disease. Dogs inheriting only one copy of the mutation are considered carriers and do not show clinical signs of the disease themselves. However, if bred with another carrier, approximately 25% of the puppies will be affected. Therefore, it is crucial to perform genetic testing on dams and sires prior to breeding in order to identify these carriers. In order to avoid producing affected puppies, all carriers should only be bred to dogs that have not inherited the AMPN mutation (“clear” dogs). However, it must be noted that about 50% of these puppies would still be carriers of the AMPN mutation. As with all inherited diseases, it is not recommended to breed affected dogs.

Paw Print Genetics offers testing for the NDRG1 mutation associated with AMPN and two other mutations reported to cause disease in Alaskan malamutes. If you have questions about how to eliminate these inherited diseases from your kennel or would like to discuss your dog’s genetic health, feel free to email us at AskUs@pawprintgenetics.com or give us a call at 509-483-5950 to speak with our knowledgeable staff.

My Furry Valentine- Our Unconditional Love of Dogs

Rickie Roo to Compete at Westminster