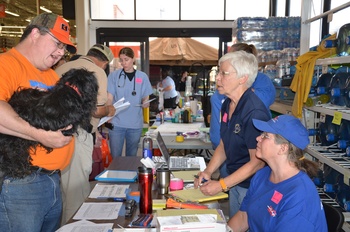 As yet another storm front that ravaged the Midwest with severe weather and deadly tornados moves east, the cleanup and rebuilding of communities, such as the devastated Moore, Okla., takes precedence.

A television special by Blake Shelton raised $6 million for the United Way, the Red Cross has a text-based donations system set up and there are several other local and national organizations mobilizing to help victims left homeless and injured by the lethal tornados.

The outpouring of emotion extends to pets too, such as this video that went viral after a woman found her missing dog among the rubble during a live television interview.

When it comes to helping animals impacted by the tornados however, no national organization is donating financial support or other needed supplies on a grand and prioritized scale. If you want to help support the animals displaced or injured by the series of tornados that have ravaged Oklahoma, it’s always best, as well as more efficient, to give directly to local organizations. This was true after the explosion that ripped apart the small town of West, Texas, and after other natural and manmade disasters – local organizations can put donations (money or supplies) to better use and with less bureaucratic red tape if given directly than if filtered through some other large organization.

For a great list of local organizations worthy of support, check out this article by vetstreet.com – it includes groups that require monetary donations, as well as food and supplies, and those that are taking in displaced pets in hope of reuniting them with their owners.

My Dog’s Mouth Has Been Bleeding? What Could Be Wrong?