Tweet
by Martine Huslig on April 22, 2013 in Trixie's Paw Prints 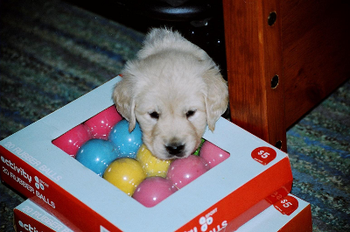 Many people with a "cute little dog" who are going to breed it to their friend's "cute little dog" and sell the puppies will say, "I don't need to do genetic testing on the dogs/parents, I am not a breeder." If you plan a litter of puppies, you are a breeder.

Other people will say, "There is nothing wrong with the mother and father, they are perfectly healthy. I do not need to do genetic testing." Carriers of genetic problems are often invisible and without testing; you cannot predict whether your litter will be at risk for disease.

Some people will say, "I am only breeding pets and I have never seen any issues in the puppies I produce. I do not need to do genetic testing." Pets are just as likely to get the genetic diseases associated with their breed as show or working dogs and in any scenario, people are quite obviously emotionally attached to their pets. $53.33 billion was spent in the US last year on pets with $13.67 billion of that spent on veterinary care alone (source). Many genetic issues do not get diagnosed as a genetic issue or may develop years after you have bred that dog. Health and genetic screening on the parents is important to minimize the chance that these issues will occur. It is just as important for pet owners, as it is to serious show dog owners, to have the healthiest dog possible. Health issues are health issues and often heartbreaking and expensive. Every measure possible should be taken to avoid health issues especially when genetic testing is as cost effective and readily available as it is from Paw Print Genetics™.

Some people will say, "I am only buying a pet. I do not need to get my puppy from a responsible breeder." A responsible breeder being one who does, amongst other things, health screens and genetic testing on their breeding dogs as indicated based on the family history and breed in order to ensure that they produce the healthiest puppies possible. Most often these potential buyers are saying this because they want to spend less on the purchase price of the puppy and feel that puppies from a "responsible breeder" cost too much. They are often failing to look at the long-term financial and emotional costs potentially involved in having a dog with health issues. Many of these people will not think twice about spending thousands on veterinary care, training, and grooming, but will balk at the purchase price of the puppy.

At the same time, high purchase price does not necessarily mean that the puppy is well bred or that genetic testing has been done. It is important for potential puppy buyers to look at the pedigree (genetic family history) of their new puppy, ask questions, and see documentation on health and genetic testing that has been done on the parents such as the Canine Genetic Health Certificate© that is offered by Paw Print Genetics™. They should request documentation of hip, elbow, and other breed specific health clearances available from organizations like the Orthopedic Foundation for Animals and PennHip. Prospective buyers should ask questions, research, and learn about the issues for which their puppy may be at risk. In some cases (especially if considering breeding their dog in the future) they may wish to have genetic testing done before they purchase the puppy. Because Paw Print Genetics&trade can screen for multiple genetic diseases with simple cheek swabs, this testing is easily done on puppies at relatively early ages. If the puppy purchased is not intended for breeding, the buyer may still be concerned that their new dog may develop an inherited condition. If the buyer intends on breeding the new puppy, remember that all living creatures carry gene mutations and non-working genes that have a potential to be an issue if they are bred with another carrier. However, from a health perspective, carriers should not be symptomatic (should not have the disease) and will make great pets. They may not be suitable under certain breeding circumstances to produce litters but being identified as a carrier of a recessive disorder in no way affects their suitability as a pet.

If you are producing puppies, those puppies have a risk for genetic disease. If you are producing puppies, you are a breeder. "Not being a breeder" does not remove the potential risk of genetic disease that comes with reproduction. This risk is why every expectant couple says "We want a boy (or "we want a girl)...but we do not care as long as the baby is healthy". By breeding purebred dogs, dogs of known heritage or intentionally bred dogs, there is an opportunity to screen for diseases to reduce the risk for genetic health issues as much as possible. By purchasing a puppy of known heritage, you have the opportunity to determine if testing has been done for diseases for which they are at risk based on their breed(s). With genetic testing you can avoid the diseases for which you tested. Although it will not exclude all possible inherited and acquired diseases, this is your best available option to increase the odds of having a healthy dog. With disease like ichthyosis, hyperoxaluria, severe combined immune deficiency and the many others that have genetic testing available, knowing this information could be critical to your puppy’s success and health.

My dog appears to be going blind. Is it genetic?