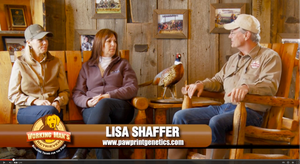 You can now catch some great Paw Print Genetics information on The Working Man’s Retriever television show, which airs during “The Landing Zone” block of programming on the Sportsman Channel. You can also view each episode on the Paw Print Genetics YouTube page at any time!

Paw Print Genetics founder and CEO, Dr. Lisa Shaffer, a geneticist with more than two decades of experience, visits with host Dan Hosford and co-host Cynean Kenny in five separate episodes and discusses everything from the basics of how genetics work and the impact upon breeding decisions to when, how and why to test a new puppy and interpreting the results on your Canine Health Certificate.

Episode One: In the first episode of Working Man’s Retriever that Dr. Shaffer appears on, she discusses silent, or recessive genes; the differences between clear, carrier and affected dogs; how you can still safely breed dogs that are carriers of known genetic mutations and how, with consistent genetic testing you can eventually eliminate genetic mutations from your breeding program. She also touches on how a Canine Health Certificate adds value to a litter of puppies and acts as a safety measure for the puppy buyer.