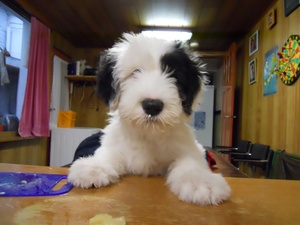 Though their early origins are vague due to a lack of documentation, the old English sheepdog’s (OES) easy going personality and intelligence are no mystery to those close to the breed. Most likely developed in western England in the early 19th century, the OSE was commonly used to help farmers drive livestock to market. Despite its natural instincts and desire to work, a well-exercised, modern OSE is just as content curled up on the couch with their favorite person as they are when working or participating in agility, obedience, or herding trials. Their characteristic thick, shaggy coat and docked tail help make the OES one of the most recognizable dog breeds in existence. However, one thing that can’t be recognized from physical appearance alone is an individual OES’s likelihood to produce puppies with inherited disease. Through the use of genetic testing and selective breeding practices, the incidence of some inherited diseases can be greatly reduced (or even eliminated) from blood lines.

One concern of the OES lover is a disease often associated with the Labrador retriever known as exercise-induced collapse (EIC). EIC is a troubling neuromuscular disorder caused by a mutation in the 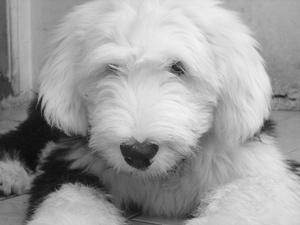 Cilia are found on the surface of a large number of cells and beat together in waves to move objects, such as to remove particles and mucus from the windpipe and lungs. In this manner, cilia protect the respiratory system from pathogens that can lead to infection. The structures that make-up the cilia are also found in the flagellum or tails of sperm. Primary ciliary dyskinesia (PCD) is an inherited disorder of the cilia that can be found in the Old English Sheepdog. In PCD, affected dogs have cilia that do not function properly. Fluids cannot be moved in the respiratory tract and can lead to infection. Symptoms include coughing, sneezing, nasal discharge and frequent respiratory infections. Affected dogs may be sterile due to the inability of the sperm to swim properly. Genetic testing of the CCDC39 gene can reliably determine whether a dog is a genetic carrier of primary ciliary dyskinesia (PCD). Carrier dogs do not have features of the disease but when bred with another dog that also is a carrier, there is a 25% risk of having affected pups. Testing should be done PRIOR to breeding so that carriers of this disease are not bred together. Screening ...