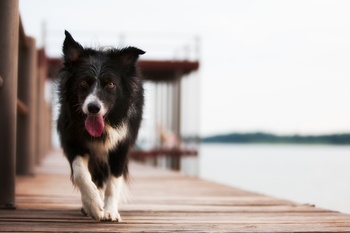 The history of the modern border collie is generally regarded to have started with a dog named Old Hemp who was born in late 19th century England. Old Hemp was a tri-colored sheepdog with unique and extraordinary abilities in herding. According to reports, Old Hemp was a product of his owner, Adam Telfer’s attempts at developing a sheepdog with a milder temperament than other sheepdogs of the time while still maintaining a high level of ability to control livestock. Old Hemp’s success in the field was paramount in him siring over 200 puppies and thus, creating a foundation stock for the border collie we appreciate today.

Widely regarded as one of the most intelligent and obedient dog breeds in existence, the border collie has branched from its roots as a working dog as breeders began showing their dogs in the conformation ring in the last quarter of the 20th century. The movement of border collies into the show ring has remained controversial as some breed lovers are concerned that border collies bred for aesthetic purposes are at risk of losing their natural abilities as herding dogs. Due to an emphasis on breeding dogs for working ability over form, some field bred border collies may not conform to physical trait breed standards established by kennel clubs with a heavier focus on the conformation ring.

Generally a healthy breed, the border collie has developed some inherited disease concerns over its history that can make life challenging for some dogs and those that love them. One lethal inherited disease unique to the border collie that can be prevented through genetic testing and selective breeding is a disorder of the immune system known as trapped neutrophil syndrome (TNS).

TNS is a disease marked by the deficiency of neutrophils (a white blood cell type) in the blood and is caused by a mutation in the canine VPS13B gene. Affected dogs display an inability to release neutrophils from the bone marrow where they are made, into circulation. Neutrophils play an important role in controlling bacterial infections and is one of the first cell types to migrate to sights of inflammation in the body. Therefore, a deficiency in neutrophils makes affected dogs susceptible to recurring, severe infections. Affected dogs are often detected when they begin developing infections as early as six weeks of age. Some affected dogs may remain undetected until around 12 weeks of age when they display severe reactions associated with vaccination. In rare cases, affected dogs show a mild form of the disease that is not recognized until adulthood. Unfortunately however, most affected dogs die or are humanely euthanized by 4 months of age due to quality of life concerns.

Chronic infections of affected dogs result in a variety of clinical signs depending on the severity and location of the infection. Anorexia, vomiting, diarrhea, fever, lethargy, increased drinking and urination, and neurological signs including abnormal intellectual development have all been described. Affected dogs may also present with active ear, eye, skin, or respiratory infections. Dogs with TNS are often smaller than littermates and some display abnormalities in skull shape, described as a “ferret-like” head.

It is important to note that the associated VPS13B gene mutation responsible for causing TNS has been reported in both working and bench lines of border collies.

How is TNS Inherited?

TNS is inherited in a recessive fashion meaning that dogs must inherit two copies of the VPS13B gene mutation (one from each parent) in order to develop disease. Dogs inheriting only a single copy of the mutation from one of its parents are considered carriers of TNS and do not show clinical signs of the disease. However, carriers can produce affected puppies if bred with another carrier of the same mutation. Carriers can be bred to dogs that have not inherited the mutation without fear of producing affected puppies. However, it should be noted that about 50% of the puppies from this pairing will also be carriers of the disease. As with most inherited diseases, in general, it is not recommended to breed affected dogs.

Paw Print Genetics offers testing for trapped neutrophil syndrome and 5 other inherited diseases of concern for the border collie. If you questions about how genetic testing can improve your breeding program or other general canine genetic health questions, please contact Paw Print Genetics at AskUs@pawprintgenetics.com or call 509-483-5950 and speak directly to our helpful, friendly staff.

Why Should I Test with a Breed-specific Panel?

What’s in a Name?