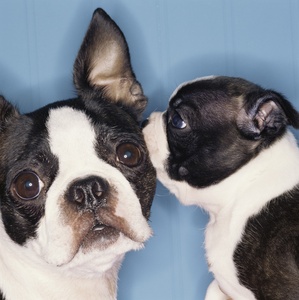 One of the best compliments that a company can receive is when a customer places another order after experiencing that company’s service. An even better compliment is when a customer refers that business to a friend or colleague. When we refer a friend to a business, we are putting our ‘stamp of approval’ on that business and putting our reputation on the line too. We hope that the company will provide that excellent customer service every time so that our friend doesn’t blame us if things go wrong. That is why referrals are so valuable to a company and why excellent customer service should be every company’s number one priority.

What constitutes excellent customer service? This may include an informative and easy to use website interface, a friendly human voice when the company answers the phone, the outstanding quality of the service they provide, and its caring interactions with the customer long after the service has been completed. When was the last time you ordered something and didn’t receive an email confirmation or reply that your precious purchase was on its way? The communication that a company has with its customer says a lot about the way it conducts its ... 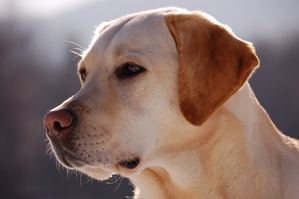 Interactions with our clients are valuable to Paw Print Genetics. It helps us understand their concerns when it comes to genetic testing. One question that we have been asked on occasion is about the number of genetic tests we have available for a particular breed as compared to a different breed and what that number means for the health of that breed as a whole. For example, Paw Print Genetics currently offers 12 genetic tests for the Labrador retriever, which is more than any other breed. For some of our clients, the natural follow-up question after this discovery has been, “Are Labradors more unhealthy than other breeds?” Though there are many diseases that have been identified in the Labrador retriever, we cannot make the assumption that they are more unhealthy or carry more genetic problems as a whole than other breeds without doing some statistical evaluation of the entire dog population. However, to my knowledge, this potentially expensive and time-intensive evaluation has not been performed. Despite the fact that veterinarians may sometimes get the impression that certain breeds are overrepresented in regards to disease, there are many factors that must be considered when objectively evaluating the number of genetic ...

Continue Reading 0 comments
Tweet
by Brian Lynn on Nov. 25, 2013 in Breed of the Week 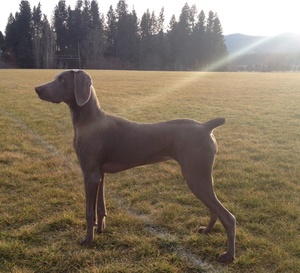 Nicknamed the “Grey Ghost,” weimaraners have a distinctive coat that gives them a regal and instantly recognizable appearance. Their short, smooth coat gray coat ranges in shades from charcoal to silver and their eyes (typically amber, gray or blue-gray) maintain the pallid look of the dog.

This majestic and unique coat color is draped around an athletic and muscled frame consistent with the look of other pointers – albeit it with a docked tail – and conveys the appearance of speed, stamina and grace. The breed standard mandates that they max out at 27 inches in height and 80 pounds in weight, with females being smaller. Recognized by the United Kennel Club, long-haired and “blue” weimaraners are considered to be disqualifications in the conformation ring by the American Kennel Club.

The weimaraner was originally developed as an all-around hunting dog for nobility in Germany during the early 19th Century. It was expected to hunt boar, bear and deer, but as big game became scarce in Europe it was used to hunt smaller game such as foxes and rabbits. In modern-day America, the weimaraner is primarily used as an upland-game-bird dog to hunt pheasant, quail, chukar, grouse and the ... 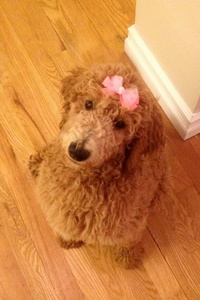 My parents and I were blessed with two healthy, happy apricot Labradoodle puppies in the last year.  Dixie and Liberty were full sisters, 7 months apart, and loved each other with a fervor that I haven’t seen in any of my other animals.  The “sissies” went hiking, shopping at the local feed store, and to costume parties together.  Despite very different personalities, they looked virtually identical and won over the hearts of strangers as they bounced along next to each other on their coupler lead.  They loved to play, run, wrestle, chase the ball, and dig in buckets of water together.  They were inseparable.

On a chilly night in November, the girls were having a regular play date in my fenced city yard.  They were home alone and having the time of their lives.  Dixie jumped toward her little 6-month old sister with an open mouth and the worst happened; her lower canine teeth hooked through Liberty’s nylon collar and the dogs were stuck.  A heart-wrenching struggle ensued.  I pulled into my driveway and rushed to help them.  I was able to get them untwisted, but it was too late ...

Continue Reading 0 comments
Tweet
by Casey Carl on Nov. 21, 2013 in All Things Dog 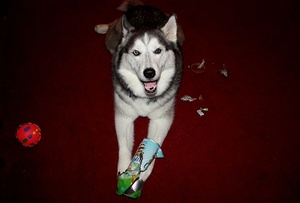 Your dog is not spiteful. In fact, I would dare to say that NO dog is spiteful. But it’s hard not to feel like your dog is out to get you when you arrive home from a solo trip out of the house only to realize that your dog took his own one-way trip to Destruction Land in your absence. The poop and pee on the floor, the torn up furnishings and clothing, and your destroyed front door are all transmitting the “I showed them for leaving me home alone” vibe. However, A handout entitled, “Destructive Behavior in Dogs” written by Certified Applied Animal Behaviorist, Dr. Suzanne Hetts, Ph.D, for the Animal Humane Society, lists 12 reasons for destructive canine behavior and spite or revenge are not one of them.

In my experience, the reason most likely to give owners the impression that their dog is spiteful is a disorder called separation anxiety (SA). SA is a complex disorder often marked by a dog’s extreme social attachment to their owner. Though it is recognized as a common disorder in dogs, it is not always straight forward to diagnose. Interestingly, many of the dogs with the disorder are otherwise very ...

Continue Reading 0 comments
Tweet
by Brian Lynn on Nov. 20, 2013 in All Things Dog 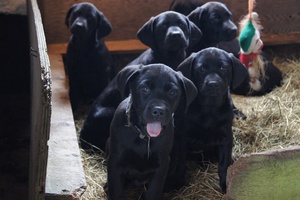 When you’re looking for a new puppy, buy from a breeder that offers a written health guarantee. The guarantee should cover the many aspects of canine health and the recourse taken by both parties in the event of a sick puppy.

But how do you know the guarantee is worth the paper it’s written on?

Here are a few tips to keep in mind the next time you (or a friend) start looking for the breeder that will produce your next puppy: 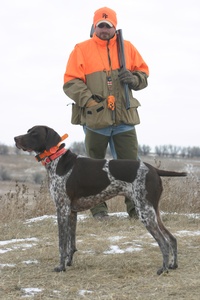 A versatile hunting dog originally bred to hunt everything from big game, such as deer, to small game like birds, raccoons and opossums, German shorthair pointers (GSP) are used primarily as a bird dog in the U.S. They remain one of the versatile breeds, however – those used to do it all; point, retrieve and track both furred and feathered game on land and water. Their hunting ability and affectionate nature make them popular as both bird dog and pet – for the last decade they’ve ranked in the top-25 of the AKC’s most-registered breeds.

The athletic, streamlined body of the GSP contains energy galore and an incredible prey drive for birds – they are hunting machines that will tirelessly pursue game through the harshest of terrain. As affectionate, friendly and trainable as they are energetic, the GSP is also a great family dog and pet – provided you give it adequate exercise and mental stimulation. Their intelligence, which allows them to be trained easily, can become a detriment if ignored; like other hunting dogs, they enjoy working and need stimulation and a physical outlet or else they will engage in destructive behavior. They make suitable guard dogs and ...

Continue Reading 0 comments
Tweet
by Brian Lynn on Nov. 13, 2013 in All Things Dog 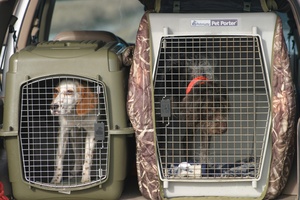 In celebration of the dog breeds that course the fields, marshes, lakes and mountains during the fall hunting seasons, we’re listing 10 of the best breeds for bringing waterfowl, upland birds, big game and small game to hand.

Labrador retriever: The epitome of the all-around dog, the Labrador can hunt upland fields, works as service dogs in tasks as varied as police work and guiding the blind. However, their true calling is as a retriever in water – first fetching up fishing nets off the coast of Canada and later picking up ducks and geese for waterfowl hunters. Heavy, double coats and webbed feet make them adroit in the water while their disposition and desire to please make them easy to train.

Runner-up – Chesapeake Bay retriever: The only American-bred retriever, the Chessie is a hardy dog that was used extensively by market hunters the Chesapeake Bay area. Their wavy, double coat is typically oily, which makes them perfect dogs for cold-water retrieving. Possessing a strong will, Chessies tend to be one-man dogs that are determined to get the job done.

German shorthair pointer: Fleet of foot and bird crazy, shorthairs are a sleek dog that will ...

Continue Reading 0 comments
Tweet
by Brian Lynn on Nov. 11, 2013 in Breed of the Week 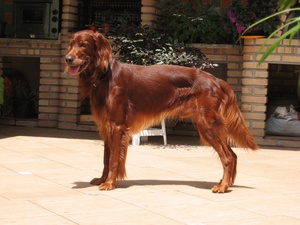 Show-bred dogs range between 60 and 70 pounds and stand approximately 27 inches tall, while field-bred red setters tend to be smaller ...

Continue Reading 0 comments
Tweet
by Casey Carl on Nov. 6, 2013 in All Things Dog 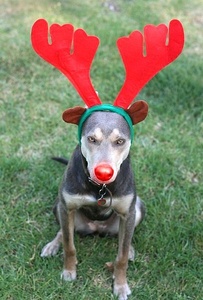 HO, HO, OH NO! If you’ve recently been to a local department store, you were likely made well aware that the holiday season is upon us. It may be that my recollections of youth have faded some over the years, but does anyone remember holiday decorations in stores before Halloween when they were kids? I sure don’t. Another thing I can’t remember from my youth is anyone warning us about potential dangers to our dogs during the holiday season. The canine exodus from the backyard to the bedroom over the past 30 or so years has been remarkable. Development of once-monthly parasite control and changing social, cultural and familial norms have been important contributing factors to the modern, intimate relationship with our former hairy lawn ornaments. With this change, comes a different set of responsibilities in keeping our dogs safe and healthy. Once threatened by wild animals, parasites and seasonal extremes, our dogs now face a multitude of new threats to their health associated with the modern American lifestyle.

Halloween to New Year’s Day is an interesting time to be an emergency veterinarian. Whether it is food, decorations, or other hazards, many dogs end up learning the hard way that ...